A Rink is a containment for a playing surface.  For example, an ice rink is a containment for an ice surface.  So then, what makes a backyard ice rink a hockey rink?  It may seem obvious but there are few key attributes that make a backyard ice skating rink more conducive to being backyard hockey rink.  Take a look below to see how some our parks and recs differentiate between a rink that is intended for hockey and one intended for public free skate.

Hockey is a fast action game of continuous skating.  The Canadian roots of hockey started on frozen ponds.  Pond players built snow banks to help keep pucks in play for hockey.  As construction materials became more available and more commercialized, the pond hockey game naturally transformed to one that switched from weather dependent snow banks to a more reliable containment that could use boards and brackets.  Hockey boards on ponds and on backyard hockey rinks not only contain the puck but are part of the playing strategy by redirecting passes and creating exciting rebounds.  The key to a backyard hockey rink as opposed to a backyard skating rink is to try to enhance the intention of the fast paced continuous game of hockey.  For many recreational hockey players, playing hockey without a border would be like shooting hoops on a basketball rim without a net.

Here is what I think would constitute a backyard hockey rink.

Rink rounds keep pucks and players from losing their fast gliding pace in the easy to find corners.  The game keeps moving along with rink rounds.  Iron Sleek Rink Round Kits are a top seller for a great reason.  Corner rounds make a big difference for hockey playing.  If your rink is big enough and you could pull the goals off the back wallâ¦even better.  Rounds keep the game continuous.  Rink rounds come standard with Iron Sleek Poly Steel Board kits.

In hockey, the side walls are strategic for passing rebounds.  A four inch lip on the side walls is usually good enough to keep the pucks contained while making for great rebounds.  For a little extra puck containment, Rink Topper will help persuade the pucks back into the ice while giving a beautiful edge appeal.

If you have a lumber rink enclosure, Use the Iron Sleek Extension Bracket to get a little more puck wall.  If you are starting from scratch and want to use Â¾ inch plywood for 18â or 24â walls, consider a Skating Rink Kit and call us to discuss upgrading.

Unlike the side walls where rebounds are slightly skewed from parallel, the back walls take the hard goal shots.  You will enjoy a taller a backboard for hockey play.   The Iron Sleek Outrigger Kit has simplified this process so that even the least handy could put in a solid backboard.  With taller backboards, you will be able to practice full strength slap shots.

Now that you have some ideas on how build a backyard hockey ice rink from a functional standpoint, the next concern is the cosmetic appeal.  A practical way to get a dasher quality look and feel is with Iron Sleek Board Poly Steel Boards.  Both the inside and outside of the rink will look and play like rigid framed poly hockey walls. 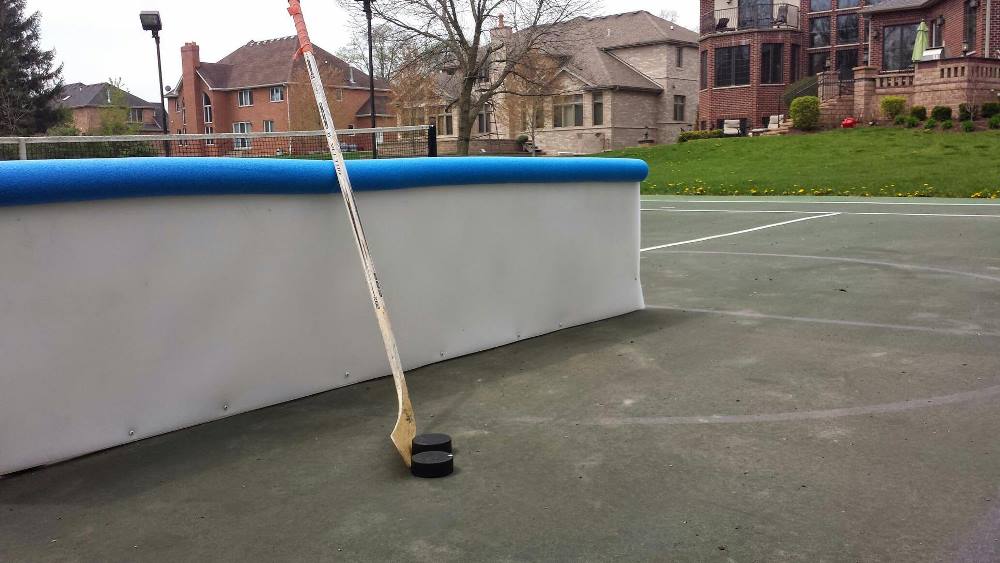 A backyard rink is a process of improvements and enhancements from one year to the next.  Iron Sleek's backyard hockey ice rinks can be upgraded and expanded on. .  Please get in touch with us to discuss your backyard ice rink project at 877 825 2334.

There are no products to list in this category.